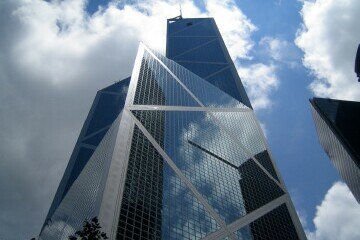 Jerry King received private BaZi (八字) Four Pillars of Destiny and I Ching training from Dr. Lily Chung in San Francisco, a world renowned expert in Eastern Metaphysics, specializing in Four Pillars and the I Ching. He has also studied Feng Shui and Four Pillars under various masters in Taiwan and Hong Kong. Jerry specializes in Purple Star Astrology (紫微斗數) readings and travels extensively, consulting globally and obtaining research data and verifying theories of cosmic flow in the Four Pillars of Destiny. In this article he gives us a rundown of the Feng Shui of the Bank of China Tower in Hong Kong.

One of the more controversial buildings in Hong Kong is the Bank of China. The tower was completed in 1989 and officially opened on May 17, 1990. The building was the first outside of North America to break the 1000 feet mark. The controversy stems from the way it was designed and how it affected the neighboring buildings around it. By looking at it from a Feng Shui perspective, the sharp corners are seen as ‘shar chi’, or ‘killing energy’ knifing down its nearby buildings and the people around it. The way the building was designed with its irregular shaped corners, it is more suitable for companies with irregular income to set up their business there.

Ever since it was completed, the governors of Hong Kong never lasted long and there was even one governor that was fired. The reason for the instability of the governors is due to the fact that the tower is located directly across from the Government House like a knife ready to slice a piece of cake. Not too long after the completion of the Bank of China Tower, the governor passed away; the following governor was fired and in the next term, the governor created many problems. The first executive of Hong Kong, Tung Chee-Hwa noted that the Government House had bad ‘Feng Shui’ and refused to live in the house.

At the time when the tower was being built, the designer in charge of the project bypassed consultations with Feng Shui masters. Once the designs were made public, he was severely criticized and decided to incorporate a few water features around the building as a ‘remedy’ to the sharp edges of the tower. Unfortunately, some of the water features were incorrectly placed. From a Feng Shui standpoint, there is a Water fountain in the West and Northwest sector of the property; West and Northwest symbolizes the Dui (兌) and Qian (乾) Gua, the metal element in those two sectors. In the ‘Five Element Theory’, water weakens metal and this is what is happening to the property. The Qian Gua represents the male or the dominant figure and it is being weakened by the water in the sector.

Fortunately, after the building was completed, Feng Shui masters gave many recommendations changing the feeling and energy of the tower. The front of the tower has many plants and trees while right by the side of the front door, flag poles are seen. On both sides of the building, there are water features bringing energy to the front. At the back of the building, there are two red awnings placed on top of the doors holding up the water and energy from the back figuratively speaking.

Going back to the Government House in Hong Kong, some might wonder why Donald Tsang has been in office for such a long time. The reason is because the killing energy of the Bank of China Tower has been dispersed by a fish pond that was built right on the side of the Government House to absorb the sharp corner of the tower. This is a great remedy as water reduces metal in the five element theory and it is working harmoniously.

The Bank of China Tower is an example of how its negative energy can affect nearby buildings and the people working inside those buildings. It also represents how Feng Shui changes after its completion and can change the feeling of its surroundings. Of course, it is always better to consult Feng Shui masters before a building is being built, but the changes after its completion goes to show that proper Feng Shui features can remove misfortune and enhance wealth luck.

Jerry King (劉衛雄), founder and President of White Dragon Consulting is an international Feng Shui and Four Pillars author and teacher, based in Vancouver Canada. Jerry is a dynamic and highly respected speaker, having been invited to present at the 2010 Vancouver Winter Olympic Games and at the 2010 Feng Shui Masters Convention, in Melbourne Australia. Jerry also provides commentary on Feng Shui and Four Pillars of Destiny as a regular columnist in Canada for Ginger Post and Urban Vibe. 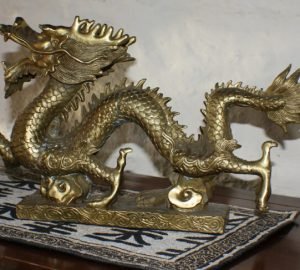 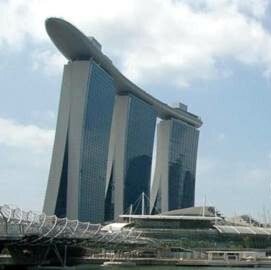