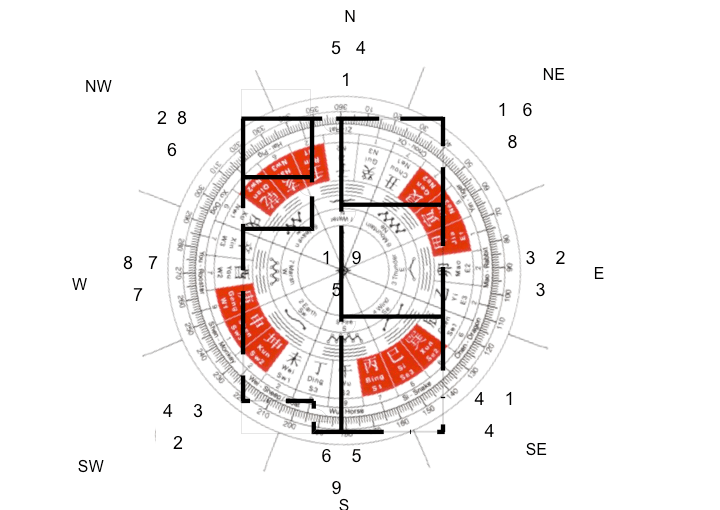 The question then arises, “How do you change the period of a building ?”

Before you can answer that question, it is helpful to understand how a star chart is created. On a piece of land the Heaven qi descends from above and the Earth qi rises from below. The union of these two types of qi creates Sheng qi, which we, in Australia, may call “the great outdoors“

When a building is built the intercourse between heaven and earth is interrupted.  When this union is interrupted by creating an enclosed space,  a new qi pattern is created. The qi pattern is based on the time the building was built and the direction it faces. It is like taking a snap shot of the qi at that space and time.

The Earth chart shows the quality of the earth qi coming from the 8 directions.

The Man chart is represented by the Mountain and Water Stars.  The Mountain and Water stars show the influence on the fertility, personality, human resource, wealth and activities of the people in the building. The Flying Star chart shows the potential, whilst the forms show what mountain and water stars are actually present. It requires the cosmic trinity of Heaven, Earth and Man, to create a star chart. To change the period of a building, therefore, requires a new cycle of Heaven, Earth and Man. There are a number of ways to create a new cycle of the cosmic trinity.

In this article, I will discuss changing a residential buildings period.

There must also be some renewal of the building, especially the flooring. This is the Earth part.

The occupants must vacate the premises for a period of time. Vacating the premises and the human effort and activity to revitalise the building is the Man part.

I have read on many Feng Shui forums, practitioners saying that you have to take the whole roof off for 3 months. Taking the roof off by itself will not change the period unless you take the ceiling off, so that the floor is exposed to the sky. The new Heaven Qi must be able to have intercourse with earth, therefore, the sky must be able to see the floor. The appropriate place for the union of heaven and earth to occur is in Heaven’s heart.

I have recommended the “rebirthing procedure” to 20 or more buildings, during my practise. All of them were successful in changing the period of the building using this method.

My first case, was with a student’s house, who was willing to try the procedure, as they had to replace their roof anyway. His experiences, whilst living in the period 5 home, included, having a serious addiction, having his brother murdered, due to a head wound, losing his business and romantic partner in a painful break-up, conflict and arguments. The previous occupant’s wife, had tragically, died from breast cancer. The husband had to sell the house as he was going broke and was very ill.  All these experiences were indicated in the period 5 chart.

To “rebirth” the house we exposed about 25% of the floor space to the sky for 1month. It was a total success. The house gained the current period chart.  A short period after the house was re-birthed, he was cured of his addiction with an alternative therapy, (which he is now a world leading expert in this field). Met a wonderful new partner, whom he is now married to. (They have a beautiful, intelligent two year old daughter), Sold his house for double the price to a developer and now lives in a beautiful new home.

Over the years, I have reduced the amount of floor space exposed and the time required to change periods to a fraction of the first trial. The occupants have all reported back that the atmosphere of the house had totally changed, the problems had gone away and many have had very positive improvements, and avoided the tragic consequences of living in a house with very poor charts.

There are other methods of changing the period of a residential building without exposing Heaven’s heart. These methods require a total renovation over a much longer period of time. Without exposing the floor to the sky the change of period is more uncertain.

My colleagues and I at the Feng Shui Research Centre, have discovered that period 2 and 5 buildings and building that are made of heavy stone are much more resistant to change.

For a testimonial from a school Principal of how rebirthing a classroom totally changed the experience of the students and teacher go to: http://thefengshuiadvantage.com/testimonials and watch the first video.

Different techniques may apply to business premises. To learn those techniques go to: http://fengshuicoursesonline.com/course/business-feng-shui

Evaluating stairs inside a home

Master George Bennis is an FSRC accredited Feng Shui Master based in Queensland, Australia. He has studied and practised Feng Shui in the United States, Canada, Australia and Japan. George has published articles in Ideas magazine, Conscious Living, Natural Life Review and has appeared in the courier mails “Business Enterprise” section. George has also appeared on local radio and Television. George is the principal of the Feng Shui Advantage Academy of Feng Shui, manages his own consultancy firm and has guest lectured to the Queensland University of Technology’s school of interior design and building environment. 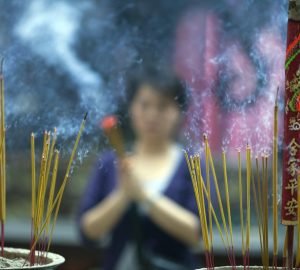 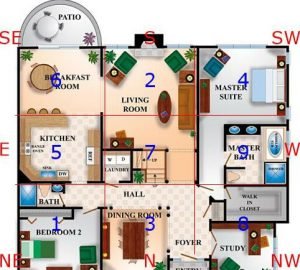 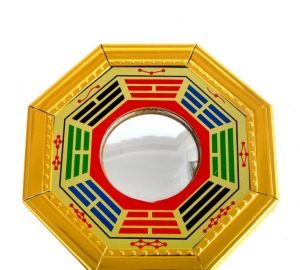