Many people regard the Grand Masters of the East (more or less consciously) as heroes of extraordinary strength; the men to who nothing is missing and whom never seem to suffer harm, pain or trouble. It’s easier for us to follow someone who proves his mastery with extraordinary acts or tricks, rather than someone who leads an ordinary life, taking care of his family.

Here I will present Feng Shui Grand Master Yap Cheng Hai. He is one of the five highest Masters of Feng Shui in the world, and the only one living outside of China. He prides himself to have eight dan in qi gong, which is a Chinese exercise system of health and defense against the enemy, both internal and external.

Yap Cheng Hai’s name first became known thanks to publications from well-known Feng Shui author, Lillian Too.  Master himself has only recently revealed to us that when asked why he stopped his “silence” on the subject of feng shui his response was, “We cannot allow the promotion and use of only those versions or hybrids of Chinese feng shui which have gained recognition, not because of their undeniable merits, but because of their commercialization and sensationalism”.

As such, during his lifetime Grand Master Yap Cheng Hai created an elite, worldwide school and gave it the name of ‘Feng Shui Center of Excellence’. It is headquartered in Kuala Lumpur, Malaysia, where the Master lived since 1953 and the co-founder of the center was Joey Yap, a highly educated young Chinese man.

Yap Cheng Hai was born in Singapore in 1927 (the Fire Rabbit). His father was a renowned martial arts master and died when Yap Cheng Hai was only twelve years old. By the age of ten or eleven, Yap Cheng Hai had read all the books available for Chinese students. In China, he then found his first Master, who introduced him to what later became the core of his life.

Master Yap studied in Singapore. After graduation at the age of 26, he was a manager in the company of his uncle, the executive of Overseas Chinese Bank and worked in Kuala Lumpur. The decision to move and facilitate the adoption of new duties helped his previously acquired skills in traditional arts of Shaolin Temple.

In Malaysia Master Yap Cheng Hai began to develop his interest associated with feng shui, but still continued working in the company of his uncle. Whilst on official travels to Taiwan he was able to read mystical books available there and became familiar with Water Formula, one of the most mysterious and effective techniques of feng shui. He started to learn Taoism at the age of ten, so that when he read all these mysterious books, they opened new worlds to him described therein. Soon, he became a teacher of qi gong and later of feng shui.

Regardless of the ‘powers’ that Yap Cheng Hai gained in qi gong and other fighting techniques, he continued to work in the family business; not running away from everyday life. He entered into a marriage in 1955 and as he often repeated, he knew his wife from previous incarnations. He remained happily with her for the remainder of this life and will be again in the next life (in jest he often adds that next time he will be a woman).

From the very beginning, the door of the compound of the house where he lived was directed towards the east and specifically in the second sub-sector, which guarantees three sons and so it happened. As for his cabinet accrued stars 1 and 6, he had to become a martial arts instructor and finally a true champion. Understanding knowledge about the stars prevailing in the rooms of the house allowed him not to oppose what and how things should happen.

Right up until his passing, Grand Master Yap Cheng Hai still lived in his old house, with his office in the same area, which meant that he was always in full control of the geographic directions and wandering stars.

He has four grandchildren who love to have fun with their grandfather and eight dogs. His wife has always accompanied him on all of his feng shui trips and often participates in his courses and lectures. She is an educated woman and she often teaches European students about Chinese culture. Because gentlemen do not talk about the age of the ladies, I can only say that Mrs. Yap was born in a Water Monkey year with the fire character of the Master providing many attractions in their lives.

For a very long time Master Yap Cheng Hai did not teach methods of feng shui, which he applied in his practice. Only Lillian Too was able to ‘pull’ from him the secrets of his authentic Chinese approach to this study. Not only was she able to extract them, but also to describe them and in this way she announced to the Western world the arrival of an authentic feng shui.

Therefore the first step had been taken. The next step was to create an organization which could dis-seminate original concepts and thus prevents, as Yap Cheng Hai said: “spoilage of Chinese feng shui”. Joey Yap helped him in this with great determination and dedication. In fact, Lillian Too describes one particular day when Joey had booked a restaurant table fully knowing that after his lecture Yap Cheng Hai would pass by and unceremoniously invited the Master to join him. In this way in 1998 they established the Centre of Excellence, which has since educated over six hundred feng shui practitioners from around the world. I am proud to say that amongst this illustrious group was also the author of this article.

An ordinary day of the modern Master of feng shui is not unusual. He would get up between seven and eight in the morning, go to the office where he would work very hard doing business in a conservative manner and without advertising, publicity or marketing. His business was always based on solid customer support.

At work he would stay until 1 pm and after lunch his feng shui consults were usually limited to two per day, with each lasting around two hours. When no one asked for a consultation, he would usually go to the bookstore to check whether there were any new books on self-improvement.

He would sleep four to five hours and eat what he liked because he knew what was good for him and what was bad. He had no time for doctors and if he did not feel well he would use only herbal medicines. He exercised twice a week and his western students were always   most fascinated when he would show them how to move internal organs. As to all the Taoist masters, the real discipline which is described in many textbooks was unfamiliar to him.

Yap Cheng Hai was able to fully enjoy his life. He was always happy to answer all questions, even those considered not so very important. He was always friendly to all beings and because he knew that I wanted to present him to Polish people, he shared with me some amazing information. Here is some of it which I now share with you:

A lot has changed in recent years. There is no longer a common school of ‘Feng Shui Center of Excellence’ and in its place was established a family run school under the name of Yap Cheng Hai Academy. 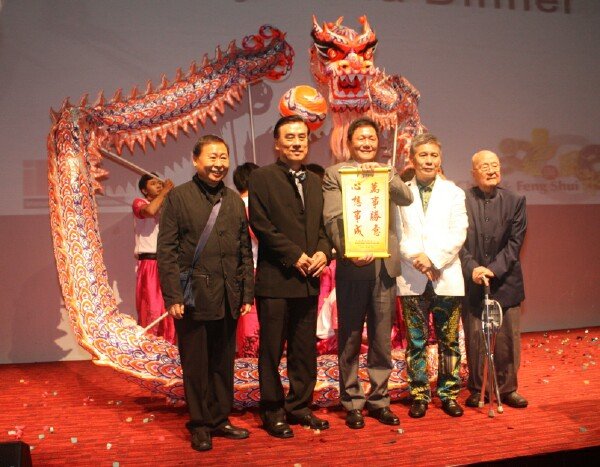 They now have much more than six hundred students and the main lecturer is the son of Grand Master, the excellent teacher Master Yap Boh Chu. For the past near fifteen years our Grand Master has done much for the world of feng shui to significantly weaken its New Age image and strengthen its original roots.

He traveled a lot and was a most popular teacher and lecturer, invited to all kinds of international conferences. He was always the good spirit of each company. Unfortunately, it was not given to us to host Grand Master in Poland, although he was so close. Back in 2006 we invited him to the Festival of Feng Shui, which took place in Warsaw. Yap Cheng Hai wanted to take full advantage of his trip to Europe so before the festival he flew to Lithuania to conduct some consultations. This was only 400 km. from Warsaw, but unfortunately he became seriously ill which shook and alarmed his family and so he never really returned to his previous excellent health.

In an interview with me he apologized and regretted not having visited our country. The last time I met with Grand Master Yap Cheng Hai was in November 2013 in Singapore at a Gala Dinner on the occasion of the 10th anniversary of the International Feng Shui Association (IFSA), of which he was a founder and a Vice President. Grand Master Yap Cheng Hai was an ordinary man with common problems to solve and many duties to fulfill. But his knowledge and his attitude towards life were extraordinary. Just let’s be ordinary people with an extraordinary attitude toward life as was Our Teacher. With his extraordinary knowledge we will be ‘fighting until the end of our lives. We have just lost the best man who could help us in this fight. HONOR HIS MEMORY

Master Jacek Kryg was born in Poland and is a scholar of cultural and religious studies, a philosopher, a doctoral student in sociology (Mickiewicz University in Poznań), a lecturer at the Jagiellonian University in Krakow, Warsaw School of Economics, Colleges of Psychotronic in Krakow, Lódź and Gorzów; specializing in issues related to the Chinese culture, especially Taoism. Jacek is the co-author of I Ching – The Book of Divination; translator and co translator of books and articles devoted to the East, including: Nina’s mind, Elements of feng shui, Elements of Tai chi, Krishnamurti talks with himself, The Book of Life, Art of spiritual healing, Feng shui, Feng shui Practical applications and Flying Star Feng Shui. For many years he was the managing editor of the eastern series (East for West, Meetings with the Master, Tibetan path to enlightenment) in REBIS Publishing House in Poznań. Translating the book Elements of Feng Shui, he first introduced feng shui to Polish readers. As a graduate of one of the most elite schools of feng shui (Grand Master Yap Cheng Hai Center of Excellence). From 2007 he has been a member of the Executive Committee of the International Feng Shui Association (IFSA) which is based in Singapore.