Hello and welcome to the Classical Corner.  In this issue a shocking revelation that should change the minds of the most die-hard southern hemispherists, but probably won’t.  For anyone who missed this debacle (and good luck to you, but where have you been?) there has been an unfortunate theory floating around, with very little real support but plenty of controversy, that certain theories in Fengshui should be inverted / reversed / flipped for use in the Southern Hemisphere.  At the risk of giving more life to something which deserves far less debate than it has already been given, the key arguments are that south of the equator certain natural forces are the ‘opposite’ of the north.

They include – the path of the sun (which is only a matter of perspective), various weather patterns or tidal currents (which are not universal) and the way water goes down a sink (a myth, dependent on the shape of the sink, not the coriolis affect which is not influential in the built environment).  Without needing to explore why these systems inherently and inevitably fail on both a theoretical and practical level, an answer of sorts can be drawn from the earliest foundation classics of Chinese Philosophy and Fengshui.

The quote below comes from the 汉 Hàn dynasty philosophical text, the 淮南子 Huáinánzǐ ‘Masters South of the River’.  Compiled by Prince 刘安 Líu Ān, in the year 139 B.C.E. the text is a collection of scholarly works on daoist philosophy, astronomy, geography, ritual, health, ethics and other topics intended as a kind of curriculum for monarchs.  Somewhat of a ‘Emperor’s encyclopaedia’.  The geographical chapter on 地形 Dìxíng ‘Earthly Forms’ yields the following lines – 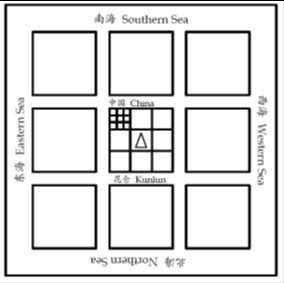 This description of the kingdom of China and its surrounding regions is likely derived from an even earlier geographical source that contains similar passages – the 山海经 Shāhǎijīng ‘Pathways of the Mountains and Seas’ dating from around the 4th century B.C.E.  The lines describe a classic nine square grid system that maps the lands.  Together with the accompanying lines the verse could be pictorially represented as shown here.

The ‘Middle Kingdom’ is located in the south-eastern division of the central region (itself divided into nine smaller provinces), the grandfather of all mountains and the mythical centre of the earth, 昆仑 Kūnlún mountain, is therefore to the north-west.  A possible modern interpretation of this is also diagrammatically represented below.

Beyond the central divisions, the distant regions and the surrounding seas, lie the expanses.  The south of which is particularly interesting in that it is called Duguang but also referred to as the land of ‘Reversed Doors’.  The suggestion here is that Duguang the Southern Expanse is below the equator, therefore the people face their doors in a northerly direction (the opposite of the traditional Chinese south facing dwelling) to catch the sun.

It is important to note here that while at face value this may appear to be support of the ‘Southern Hemisphere Considerations’ school of thought, deeper analysis proves otherwise.  This is so for a number of reasons – 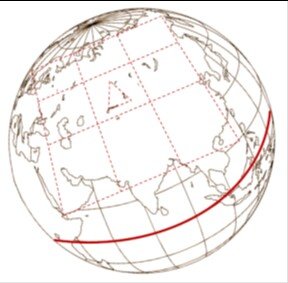 Firstly this clearly show the Chinese had knowledge of ‘differences’ south of the equator at a very early stage in the cultural development – the Han dynasty, also known as their ‘golden age’ of philosophical thought.  It is not known if they had already journeyed so far at this stage in history, but likely, considering the detail of their descriptions of the populations, topography, flora and fauna (no matter how fantastical in interpretation at times) in these ancient guidebooks.  With this knowledge in place, there are no records of any attempts made throughout China’s long history to reconcile any changes to the compass, calendar or elements, trigrams, stems and branches.

Secondly, without doubt they had travelled well below the 00 parallel by the time of the 14th Century C.E.  The voyages of the great explorer 郑和 Zhèng Hé took Chinese in vast numbers throughout South Asia, Middle East and even the eastern coast of Africa.  Still there is no evidence that theories too account for supposed ‘opposite phenomena’ were proposed, nor buildings erected there in such a manner to support this.

Finally this information about the changes of the southern regions was unquestionably in the hands of the Fengshui masters.  The most famous commentator and editor of the most popular edition of the aforementioned Shanhaijing ‘Pathways of the Mountains and Seas’ was none other than the grandfather of Fengshui himself 郭璞 Guō Pú.  The author of the original Fengshui classic the 葬书 Zàngshū ‘Book of Burial’, himself made no suggestion of any alterations needed for the practice of Fengshui in the Southern Expanses.

With all this evidence of prior knowledge it is hard to believe the Fengshui masters of antiquity, who much like the masters of today, prided themselves on exploring new theories and promoting greater understanding of the art, didn’t have the wisdom to make corrections for the Southern Hemisphere.  Are we to believe it took not the combined minds of thousands of years but some self-proclaimed experts from the last decade or two to work this out?  This does lead to one last point though, and that is of orienting to the sun.  It surely does make sense to face north in the southern hemisphere to attract the most warmth of the sun, as much as it does to face south in the northern hemisphere.  On this point many modern practitioners agree, not all southerly directions are automatically auspicious according to the compass school.  It is therefore a requirement of form to face the sun and need not have us alter the compass or calendar in any way to match.

1. A 里lǐ is a Chinese unit of distance approximately equivalent to 0.5km
2. With south at the top according to classical Chinese mapping convention

I am confused…..probably my age! something is very unbalanced in my life but I am unsure which part of Feng Shui I should be following for New Zealand. Does Northern or Southern matter?

Hi Andrea, it is a confusing issue! The gist of it is, we don’t change the Feng Shui Compass for the southern hemisphere. That said, we do need to take into account the direction of the sun. Facing north will bring the sun to the front of the home, facing south will bring sun to the back, it all depends where you like the sunlight coming in…

Hello Tyler, By Fengshui compass you mean we don’t change the classical Bagua in the Southern Hemisphere from what it is in the north?

Hi Lindsay,
The general consensus in Feng Shui practice is not to change the Bagua from northern to southern hemisphere. There are a few who still advocate reversing/flipping/mirroring the bagua in different ways (and many of them do not practice in the southern hemisphere) but all have their downfalls. If you change one thing, you have to change everything – which means yin and yang would have to reverse!
Of course it also depends upon if you are looking at the Later Heaven or Former Heaven arrangements and interiors or exteriors…

surely you only reverse north and south?… the sun still rises in the east etc… so what’s the issue?
I don’t see that the awareness of southern hemisphere areas at what time changes anything at all… especially since most evidence points to the Chinese still having ‘flat earth’ style concepts in the 14th century, and the equator would have meant literally nothing, except ‘this place is different, things differ as we go further south’ . Things differ when you go far enough in any direction….
Of course the sun’s path differs depending on your perspective – I thought that was the point of the thing.
The main idea is for people to order their thoughts and feelings, and feng shui is a tool for this, as are many other systems – some in direct conflict with each other’s principles. Choose whichever works for you… they all work if they work for you. I like feng shui, per the southern hemisphere- it works for me!