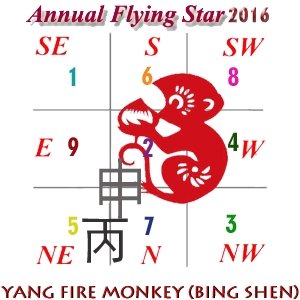 The dynamic movement of energy changes with the passing of time — in the year, month, day, and hour. Flying Star Feng Shui shows you how these changes and movements of energy can affect space and people. That’s why Flying Star is considered one of the most dynamic and effective techniques in Classical Feng Shui. It is used not only to assess the current condition (i.e., the energetic quality) of the home, but it can also be used as a valuable forecasting tool.

Every home has its own Flying Star chart based on the year the home was built, the facing direction of the property, and the composite make-up of natural landforms (external) and the layout of the floor plans (internal). In other words, every home has an energy map, just like a person has his/her own natal birth chart.

This Flying Star chart will consist of many numbers (1 to 9) and will occupy as a Water Star position (energy governing money prosperity) or a Mountain Star position (energy governing health and human harmony). These Stars will be activated or suppressed depending on the Feng Shui of the home. Over the course of time, events will unfold in the home and affect its residents in a positive or negative way. That’s why most people, especially in Asia, work out the yearly influence before the current year’s end so that they can make plans and adjustments for the placement of Feng Shui remedies and enhancers for the upcoming new year.

Every year, there is a “Ruling Star.” The Ruling Star of the year is the Star (or number) that occupies the center position of the Flying Star chart for that year, and it will dictate where the rest of the numbers will land. These Stars are called “Visiting Stars” because they will not stay in the same location forever. They will “fly” to their positions according to the Luo Shu Path and will stay in their respective sectors (i.e., East, Northwest, West, etc…) until the solar calendar changes. In the meantime, wherever they have landed, they will interact and influence with the existing Stars in the home.

This is a similar idea to BaZi or Four Pillars of Destiny. Your Four Pillars (Year, Month, Day, Hour) do not mean anything until it is influenced by the person’s Luck Pillars (10-year luck influence) and the year. These are the variables that formulate the ups and downs of one’s destiny. Look at a car, too. A car is not going to move forward until you start the engine, put it in gear, and step on the gas pedal. Flying Star is like this as well. A home’s Flying Star chart exists but what will it do to the home will depend on the influences of and interactions with the Visiting Stars.

The Ruling Star for 2016 Yang Fire Monkey is 2 and the numbers will fly in ascending order based on the Luo Shu Path. But reviewing this yearly influence singularly also has no meaning. You cannot interpret this to mean every Southwest corner of a home everywhere in the world will benefit from 8 because that is where it landed in 2016. Remember, the key is knowing how to analyze these Visiting Stars and interpreting their interactions along with the existing Stars in the home.

For instance, 2016 Visiting Star 9 is in the East sector. It does not mean every home will experience money prosperity in the East. You have to first know the Flying Star chart of a particular property to see how Visiting Star 9 will influence the dominant Star already residing in that location.

Let’s say a home has a Water Star 2 (an Earth Element) active in the East, can this home benefit from 9 this year?

The answer is probably no. Visiting Star 9 arriving in 2016 will not be indicative of positive money inflow or retention; rather, it will aggravate an already negative star. In this case, 9 will make the Sickness Star (WS2) stronger. Why? Nine is a Fire Element and Fire supports Earth. And so in this example, you cannot put an active water feature such as a fountain to support 9 because 9 (along with the active object) will only make 2 stronger, which is more devastating for health. This is a classic case of why some homes cannot benefit from “good” Feng Shui all the time.

Remember, traditional Feng Shui is a lot more systematic, sophisticated, and analytical than most people think. Everything is always interconnected and the workings of energy don’t almost always operate singlehandedly. That’s why I tell my students, the key to executing a successful Feng Shui audit is being able to see the big picture while also being diligent in the details, but it is also important to know how to prioritize and analyze the interactions of the whole.

Happy Feng Shui! To learn more about our 5-Day Feng Shui Training under the Raymond Lo School of Feng Shui & Destiny, visit www.FengShuibyJen.com to see if we are coming to a city near you!

Evaluating stairs inside a home