Finally the tumultuous Dragon Year is retreating and we are embracing another snake year! Do not be fooled; although the snake is seemingly smaller than the dragon, history has many times presented us with major events during past snake years. This include the 1941 Pearl Harbour attacks, 1989 Tian An Men incidents and the 2001 September 11 terrorist attacks, just to name a few. What will this year pose for us? Let us start our yearly analysis.

Not a good sign to begin with: the clash between water and ﬁre! This may not be a harmonious year after all, but luckily both are yin elements and therefore the severity of the conﬂicts can still be paciﬁed. The year will begin with Gui water as the ruling element. As Gui characterizes the mist, dew and rainwater, the ﬁrst four to ﬁve months of 2013 will continue to be in uncertain atmosphere (imagine walking in the middle of the mist!). The sentiments will be moody in any way, even that the market and political situations will be as sensitive as ever. However it is not all doom and gloom as yin water Gui is well known for its romantic traits. Entertainment industries will still ﬂourish as people are in the mood to enjoy some romantic and fun activities (and yes, many babies will be born this year too although not as many as during the dragon year).
As the year progresses and the snake creeps in, this yin ﬁre will trigger global conﬂicts to another level. Like a candle that constantly ﬂickers, the world situation may heat up one second and cool down the next. Snake ﬁre has long been associated with hidden tensions that boil underneath and can surface out anytime, just like a snake catching its prey. Snake is also often associated with an imagery of long vehicles such as trains and planes; be careful of traveling this year as there will be more trafﬁc accidents especially related to any long vehicles. Apart from those, snake is a philosophical animal with many twists and strategies to get what it wants. The year of 2013 will be an intriguing one with many ploys around; do not fall into one! Use this year to contemplate, plan ahead and strategize, but do not hastily jump into actions so soon.

More from this hexagram
•Mountain over thunder, again implies suppressed explosion. Last year we had earth over thunder, and this year it is a mountain instead of earth! Situation will be seemingly calmer, but do not be fooled as the inner conflicts will also escalate. Political situation will heat up to another level; countries are prone to internal conflicts although look
peaceful from the outside.
•The hexagram also denote earthquakes and major volcano eruptions in 2013, as mountain is on top of thunder.
• Possible conflicts between brothers, as Gen (youngest son) and Chen (eldest son) are on top of each other and in conflict. Business partnership among siblings and good friends are in danger of collapsing because of miscommunications. This can also denote potential civil war (war between brothers) in many countries 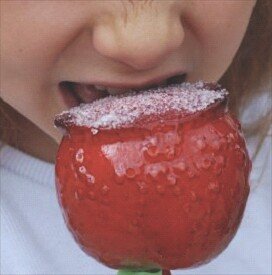 The image of this hexagram is depicting an open mouth. Conflicts, sickness/food poisoning and communication are all related to the mouth, which are the three key problems we need to watch out for in 2013 (in line with the elemental forecast of yin water and fire clash). Be mindful of what we say and eat as it could be our potential downfall, even more so when this year is not favourable according to our personal Four Pillars. Those who have unfavourable output elements in their chart would need to be extra cautious, curb yourself and do not be impulsive in your decisions. And that also include any bad eating habits!
As we can see from the chart above, the ‘self’ element is yin metal, which will be what the whole chart evolves around (western countries, European zones, global ﬁnancial situations to name a few). Wood is very strong to weaken metal, and the overall chart is rather wet and cold. Fire is the most needed element in this chart and therefore, the world’s condition and economic recovery will still depend on ﬁre industries. Metal industries will be weak and under pressure, while earth will be on demand. Water is needed to make yin metal shine, and will be strong especially in the ﬁrst quarter and fourth quarter of the year. There is no best timing of this year in particular; each season will bring its own strength depending on your trades as well as your own personal luck. It is best to avoid too much movement and expansion as the year will be more tumultuous in terms of economy compared to last year. Let us look at the micro forecast for each sectors:

Politics
Western countries will continue to enforce new regulations to regain strength in the  global political arena, but eastern countries such as China will still remain a strong  competition, together with powerful bargaining positions of emerging third world  countries. Hidden political tensions will still boil among some countries with  potentially bigger political instabilities as a result. European countries in particular  will still be under pressure.
Economy
The Euro currency will continue to weaken, as the global market will still revolve around the eastern countries and emerging new economies of third world country markets. The global financial situations will fluctuate greatly, especially with other potential issues to tackle such as possible weather disasters and epidemics in the  year of the water snake.
Property
The property market in Singapore will still be on the slow rise. Price will continue to go higher although not  as sharp as previous years. Since earth is still in demand, housing supplies still cannot meet the market  demands, thus contributing to the stable price increase.
Stock market
Stock markets will be as fluctuating as ever with more new funds coming in, but the index will not hold nor  stabilize for the long term. It will still be greatly unstable, therefore the best time to trade is when fire element is relatively strong (first and second quarter).
Other Trades/Industries
Banking and finance belong to metal elements, are still weak and under pressure in 2013. Do not make hasty moves if you are in this industry.
Travel, transport, tourism, shipping, logistics and other water related industries and will be quite good during first and fourth quarter of the year.  Oil prices will fluctuate.
Entertainment industries and hospitality will fare better this year. Natural resources and mining in overall will be stable and relatively good. Gold and precious metals’ prices will also stabilize in 2013.
Education, timber, fashion and design is of wood nature and will fluctuate throughout the year.
A final note and other things:

Apart from those, natural phenomenons such as droughts, global warming,earthquakes and tornadoes will continue to escalate throughout 2013 as mentioned in the beginning of this article. Accidents and transportation problems will also be the highlights of the year. Singapore in particular could face more disputes and dissenttowards our migrants, all stems up from communication and legal problems. In your personal space, be mindful of office gossiping, bad mouthing and miscommunication at work that could lead to unfavourable outcomes! Conflicts could also escalate in your own home environment as a result of this year’s clash energy; divorce rates will continue to rise. Thus, let us look as feng shui and flying star for 2013, to implement necessary cures that could minimize the shortfalls of the water snake year. 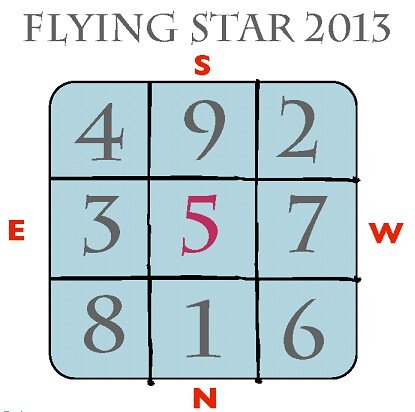 This star signify promotions and growth. If your door is facing north, it will be auspicious for academic success and recognition. Place a bowl of clear water on your north sector, and keep it clean and bright
SOUTHWEST – STAR 2
This is a sickly and misfortune star. If you have any doors or windows facing southwest, hang a strand of six metal coins or 6 rods windchimes. Be extra
careful for those with bedrooms in this sector too, put metal objects as cure and take care of your health/ relationship
EAST – STAR 3
This is a quarrelsome star. Cure with a red object e.g. a red doormat
SOUTHEAST – STAR 4
There are potentials for romance and academic success with this star. Place a vase of fresh flower here for romance activation or use it to study/work
CENTRE – STAR 5
This year inauspicious energy will emit from the centre of the house. Make sure this area is not dark, cramped and cluttered. Place some metal cures, and more importantly check the light and air ventilation in your house to help disperse bad energy and not let it get trapped inside the house
NORTHWEST- STAR 6
This star may bring about travel and promotion, especially for the father of the house. A bowl of fresh still water may be placed on this corner
WEST – STAR 7
Known for a robbery and fire hazard star, this is an inauspicious one to have especially in your kitchen. Be extra careful on your cooking activities
NORTHEAST – STAR 8
As this is the most auspicious star to have, you may enjoy more prosperity by having your front door facing to this direction. Activate the area with moving water such as fountains, or any other moving objects
SOUTH – STAR 9
This is another auspicious star for wealth and joyous occasions. Having bedroom at the south may enhance your chance of having offsprings too! 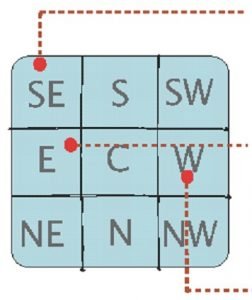 GRAND DUKE JUPITER / TAI SUI 太岁
This year, the Grand Duke is sitting at SE2 142.5°-157.5°or E6 mountain.. It is best not to offend the Grand Duke: avoid working desk facing south east or undergoing renovation in that area.
THREE KILLINGS / SAN SHA 三煞
San sha for 2013 is located at the east. This is an area not to be disturbed by heavyworks and knocking either. If you are undergoing renovation, be careful with the east area. It is best to keep it quiet as not to activate inauspicious energy.
CAI SHEN 财神
it is a belief that the annual ‘God of Wealth’ will bring wealth to those who pay respect to Him. During Lunar New Year eve (9 February 2013) at 23.00 hours, you can ask for blessings at various temples to the west direction. One of the most popular place will be the Guan Yin Waterloo temple but as usual, Grand Master Vincent Koh favours to watch the procession at the Balestier Temple. You are all invited to join for the blessings as well!

Below are the 12 monthly flying stars for 2013. Please take note of stars 2,3 and 5 especially  when it flies into your main door, or your bedroom : 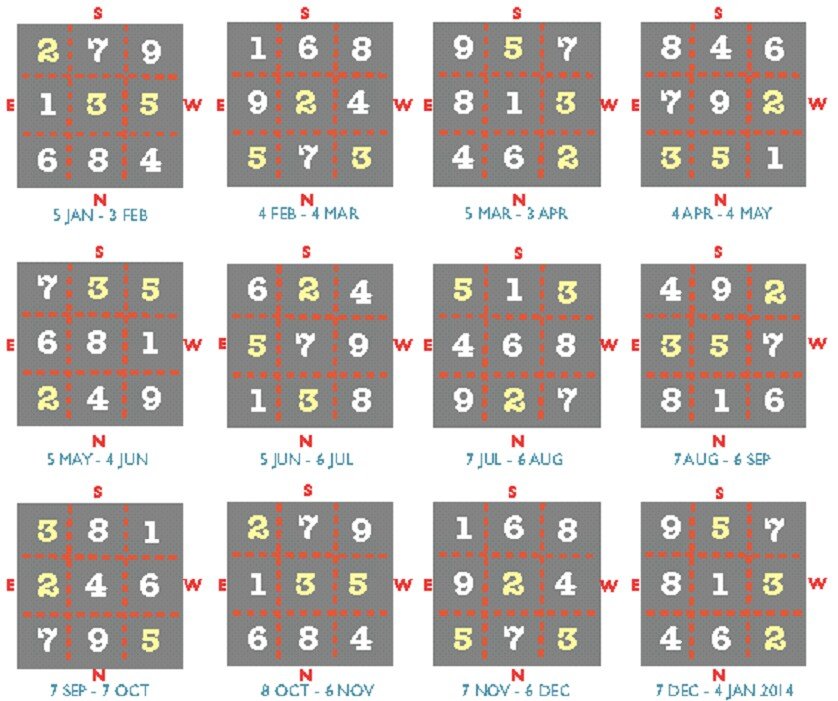 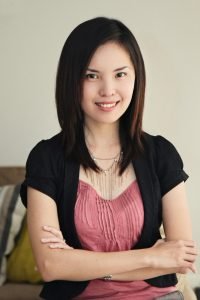 Anita Zou B. Arch, AFSM (Accredited Feng Shui Master) and is a                    graduate of University of Melbourne, Australia in Architecture. Taking interest in Feng Shui since her university age, she has learned from numerous renowned Grand Masters such as GM Raymond Lo (Hongkong) and GM Yap Cheng Hai (Malaysia). She is currently a Feng Shui consultant in Singapore Feng Shui Centre under personal mentorship of Grand Master Vincent Koh.  To date she has undertaken numerous projects, ranging from small to big scales both in Singapore and Indonesia, integrating feng shui and eco-design carefully. She has also been engaged in various teaching and public speaking especially related to Feng Shui, healthy design and architecture in various corporate and educational institutions namely Raffles Institution and Nanyang Academy of Fine Arts, Singapore. www.natura-home.com