The sudden death of Whitney Houston, a musical icon from our younger days (for those who remembered the 80s and 90s) has made us reflect on our own mortality, as well as arouse feelings of nostalgia for those bygone days. The highly talented but ill-fated singer’s Chinese astrological chart has also gotten students of Chinese astrology abuzz with discussion as to what led to her demise.
Houston is born at the cusp of a lunar-solar month in Chinese astrology: she is born on the second day of the Metal Monkey solar month but it still falls within the lunar month of the Earth Sheep. According to my teacher Lily Chung, classifying charts according to either the solar or the lunar month is too simplistic. What one should do is to look at the energy flows present in the solar month and then correlate it to its position as per the lunar month.
Houston was born on the second day of the solar month, when the prevailing energy was still Yin Earth. It actually persists up till the sixth day. Looking at the flow chart, the prevailing energy in the last days of the Sheep earth is Yin Earth. Thus, Houston’s month of birth will be Yin Earth Sheep. If she were born on August 14th or after (the seventh day of the monkey solar month), then her month would be Yang Metal Monkey.

With this in mind, we will now consider her chart. Using the Sheep month in this example explains her peak years in the 80s and early 90s and also her fall from grace after. If the Monkey month is used, it does not adequately account for why she was so successful at her peak as it would be during an unfavourable Yang Water luck cycle.

I would like to thank my friends and fellow Chinese astrologers Jerry King and Andrea Stoltenberg for their input and thoughts about this article. 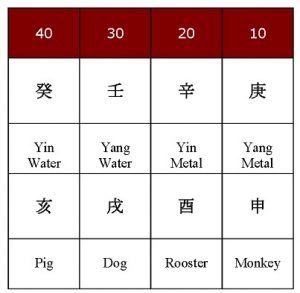 Whitney Houston’s chart has two conflicting energies: the first is of wood, the rabbit in the year pillar and the sheep in the month pillar combine to strengthen her Yang Wood day self. However, there is also a Yang Wood competitor that is adjacent in the hour pillar, whose effect will become apparent during her mid 40s. Her Yang Wood day self also combines with the Yin Earth present in month pillar, which suggests that she has access to wealth, as earth is her wealth element. The other energy present in her chart is that of metal, present in the monkey in the House of Spouse and also in the dog in the hour. The metal controls the competitive wood elements in her chart, which if allowed free rein would overwhelm the rest of the chart.

1)      Metal: this represents her power and career element that helps her achieve professionally.
2)      Earth: this represents her wealth but it also gives rise to her best element metal, thereby contributing to the flow of metal.
Whitney Houston’s negative elements are:
1)      Wood: this is her original self element and should be suppressed so as to go with the flow and control of metal.
2)      Water: this revives her original self element and disrupts the flow of metal.
3)      Fire: this destroys her best element metal.

Whitney Houston signed a recording contract with Arista Records run by Clive Davis in 1983 (Water Pig) during the favourable Monkey luck cycle (1978 to 1983). The Monkey strengthened the positive metal in her chart and gave her many opportunities. It was also during this period that she started modeling, appearing on the front page of Seventeen and also appeared in layouts in Glamour and Cosmopolitan.

The next Yin Metal luck cycle (1983 to 1988) saw Houston burst on the worldwide entertainment scene, especially in years that contained her favourable elements. In 1985 (Wood Ox), her debut album Whitney Houston was released. Sales only started picking up towards the second half of the year when the earth influence came in, after Saving All My Love For You topped the charts. Her momentum continued in 1986 (Fire Tiger), with the first half of the year seeing her album top the album charts one year after release and two number one hits with How Will I Know and The Greatest Love Of All. The Yang Fire present in the first half of 1986 was not negative as it was akin to the sun shining on the metal present in her chart and luck cycle. In fact, the Yang Fire of that year combined with the Yin Metal present in the luck cycle as well. 1987 (Fire Rabbit) saw her release her follow up album Whitney in the first half of the year. The Yin Fire present was not as positive as the Yang Fire as it burnt off some of the positive metal. Indeed, while the album was criticized for being too similar in style to the debut album, it performed well commercially and gave her a string of number one hits, including I Wanna Dance With Somebody Who Loves Me. The success of her second album continued into 1988 (Earth Dragon) with two further number ones So Emotional and Where Do Broken Hearts Go. The second half of the year saw her score a hit with the 1988 Seoul Olympics Theme Song One Moment In Time. The Dragon in the year provided further stimulation and growth to the metal element: even though it contained water, the prevailing energy of the luck cycle was metal which meant that the earth energy within took precedence.

She entered an even more favourable Rooster luck cycle (1988 to 1993) when she enjoyed the peak of her commercial success and critical acclaim. The Rooster completed the western directional trio of the monkey, rooster and dog present in her chart. Her third album I’m Your Baby Tonight was released towards the second half of 1990 (Metal Horse). It only reached number three and did not sell as well as its predecessors possibly due to the negative fire energy present in the second half of the horse year. However, it did spawn two number one singles, the title track and All The Man That I Need, which became number one in 1991 (Metal Sheep). The positive influence of metal in the first half of 1991 also saw her stirring performance of the Star Spangled Banner at the Superbowl of that year (which was just a few days before the changeover from the horse to sheep year): her performance was so popular it was released as a commercial single and video. In 1992 (Water Monkey), she married Bobby Brown, in the year where her spouse animal Monkey was present. She also reached the peak of her career during this period with The Bodyguard soundtrack that was released in the second half of 1992. The lead single I Will Always Love You (her rendition of a Dolly Parton song) was at number 1 for 14 weeks and the album for 20 weeks, selling more than 40 million copies worldwide, becoming the biggest selling soundtrack of all time. The Bodyguard also grossed more than US 100 million dollars at the box office.

The next luck cycle Yang Water (1993 to 1998) was not as favourable as the previous one. Although she starred in hit movies like Waiting To Exhale (1995 Wood Pig) and The Preacher’s Wife (1996 Fire Rat), sales of the soundtracks did not approach those of her previous hit albums. There were also the first inklings of the drug problems that would later overwhelm both her career and her thus far immculate image.

The Dog luck cycle (1998 to 2003) contained some positive earth and metal energy that was able to help her. Her fourth studio album My Love Is Your Love did not perform well when it was released in November 1998 (Earth Tiger), but it picked up momentum in the first half of 1999 (Earth Rabbit) and spawned hits like My Love Is Your Love and It’s Not Right But It’s OK. Her greatest hits album was also released in May 2000 (Metal Dragon). She also started receiving attention for her erratic behaviour, in January 2000 (when the wood energy of the rabbit was still present), airport security found marijuana in her and husband Bobby Brown’s luggage, but they boarded the plane before the police arrived. Charges were then dropped. She gave her infamous interview to Diane Sawyer in 2002 (Water Horse) where she stated Crack is wack. Her album Just Whitney performed poorly as did the singles off it due to the negative fire energy present in the second half of that year and the water energy that started off 2003 (Water Sheep).

The Yin Water luck cycle followed (2003 to 2008), which started feeding into the negative wood energy present in her chart. While she only released a Christmas album in 2003 (Water Sheep), which also performed poorly, she became a constant target of the tabloids for her drug use and her appearances on her husband’s reality program Being Bobby Brown did little to improve her image. Her divorce from Bobby Brown was finalized in April 2007 (Fire Pig), a year when the negative wood energy was present.

Her final Pig luck cycle (which would have run from 2008 to 2013) was also negative, although she returned in August 2009 (Earth Ox) with the album I Look To You. The presence of earth in that year assisted in the album reaching No. 1 on the US Album chart, albeit only for a week. Unfortunately, her promotional appearances and her Nothing but Love World Tour only served to confirm that her voice had been adversely affected as she demonstrated difficulties hitting notes.

She was found dead in her bathtub on the 11th of February 2012 in her Los Angeles hotel room and certified dead by paramedics around 1550 hours. On the day she died, the water element was in abundance three Yang Water stems were present in the day, month and year pillars. The tigers present in the day and month pillars also clashed with the monkey present in her own day pillar, one of the sources of the favourable metal element in her chart. There was an excess of water present in her chart at that time, and she was found in her bathtub. It is still unclear at the time of writing whether her death was caused by a drug overdoes or drowning. The lone positive earth present in the hour pillar was insufficient to protect her from the tide of water present. The next luck cycle coming up would have been that of Yang Wood indicating more competition and would have also been problematic as well for this ill-fated singer.
Edition 3
1 comment
0
FacebookTwitterPinterestEmail

Dr Jin Peh provides Feng Shui consultations and Astrology life readings using classical and traditional methods. He also offers individual one on one or group classes. Since 2005, he has been the Feng Shui columnist with Hong Kong's major English newspaper, the South China Morning Post. In November 2010, a compilation of his columns, Feng Shui: A Hong Perspective was published. Jin grew up in Singapore but moved to Perth, Western Australia as a teenager, where he graduated as a doctor in 1996. He then studied Broadcasting Journalism at the West Australian Academy of Performing Arts. In 2000, he started a two year feng shui apprenticeship in Taiwan with renowned master Chen Chien Lee in both Yang and Yin House feng shui (residence and grave), while studying classical Chinese at the National University of Taiwan. Jin is also trained in both major systems of Chinese astrology, the Ba Zi (Eight Characters of Birth) Astrology with Lily Chung in San Francisco and the Zi Wei Dou Shu or Emperor Gate Astrology with Tony Tan in Singapore.

Hello Jin a very good post, I think that yahoo brought me exactly the info I was wanting, I enjoy reading the new publications, thank you very much Great job