Vicki Sauvage has been constantly in pursuit of knowledge in Feng Shui for many years and has undertaken advanced courses from internationally renown masters including GM Raymond Lo, Master Joseph Yu, Master Peter Leung, Master Henry Liu, GM Yap Cheng Hai and Jerry King.  In this article she examines the 2013 Australian Federal Election.

2013 has been a year of great change with Kevin Rudd trumping Julia Gillard as leader of the Australian nation in June of this year. Since regaining the leadership of the nation he has pushed through some very important changes to reform the Australian Labor Party and secure agreement from Australian neighbours on the securing of Australia’s ‘borders’ and the scrapping of the Carbon Tax to transition into the ETS linking it to the European price of carbon.
3 days after the 3rd anniversary of his overthrow he contended and won that all important poll.  So where is he in his personal cycles and who are the other potential players in the stakes for the next 3 year parliamentary term?
The major players Kevin Rudd v Tony Abbott
Kevin is a yang fire monkey (day pillar). Tony is a yang metal dragon (day pillar).
Kevin surrenders to metal (wealth). Tony is a very strong metal man who is afraid of water.
Kevin entered the dragon part of his 5th luck pillar in 2007 (who can forget Kevin 07), and in 2012 he entered his 6th luck pillar of kuei mao. Water is his power. He is a surrender to metal man who does not mind water. Tony is a dominant metal man who in 2011 entered the snake part of his 5th luck pillar. He absolutely cannot handle water or fire but loves metal and likes earth.
We could argue that Kevin can use Tony’s metal but Tony cannot handle Kevin’s fire. Kevin can ‘exploit’ the metal to advance his career. This year has water stem and snake (metal) branch. Kevin likes metal – Tony likes the metal. The water is fading in effect and the metal from the branch is rising in effect. The 2nd half of the year will benefit both men.
Historical perspective
Having analysed all the Australian prime ministers including those who held power for only a few days, weeks or months it is apparent that almost all of them have several commonalities.  Remembering we do not have any hour’s of birth for anyone we say the following things being mindfulness of that factor.  Those who served in Spring St (Melbourne), and Old Parliament House, had one or all three of the following stars in their natal chart or the stars appeared in their luck cycles whilst they were leading the nation.
Historically therefore those people who have one or all of these factors present in their charts have guided the Australian nation. This was particularly evident in the period between federation and the inauguration of the New Parliament House. (Look out for the forthcoming article about the Feng Shui of Canberra). There is also another rather glaring statistic – that is the prevalence of metal in the charts of the many of the leaders. That is something for a further or deeper analysis but too extensive for this article.
Australian Prime Ministers and Stars 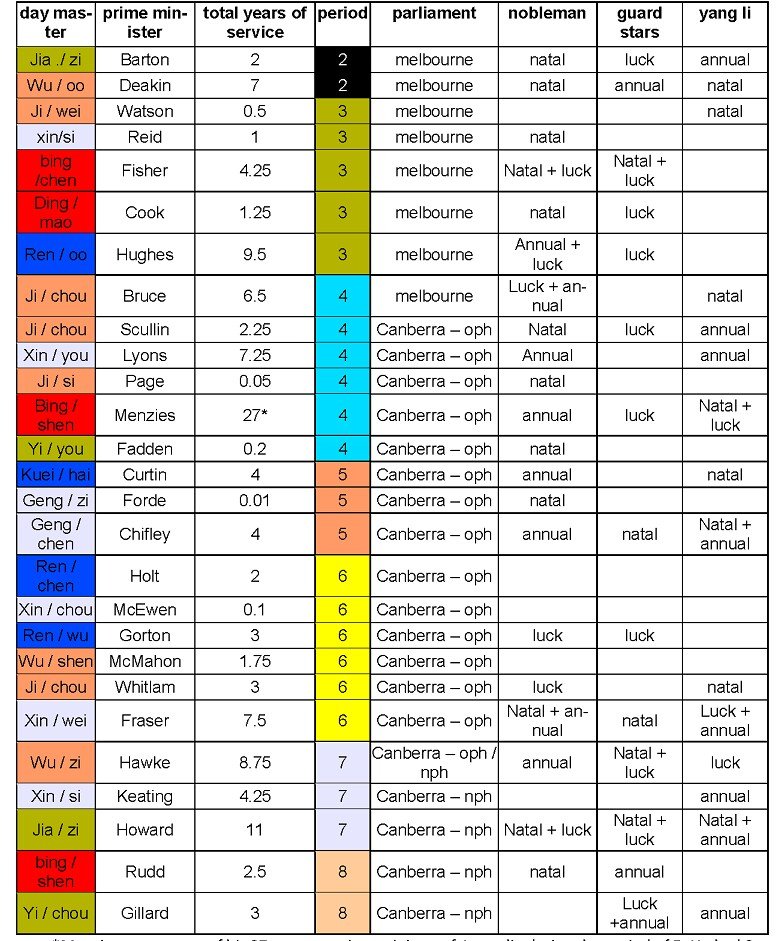 *Menzies spent most of his 27 years as prime minister of Australia during the period of 5. He had 2 terms in office the first in period of 4 but when we transitioned to period of 5 he stayed in power for almost the entire 20 year cycle.
What stands out is that the leaders who lasted in office more than one term had one, two or three of the special stars in their natal charts and then, whilst in office, were supported by either luck cycles or annual stems or branches that carried these favourable stars. In addition, the period luck has also determined the longevity of leaders.
Menzies who was our longest serving Prime Minister spent all of period 5 in office. Chifley and Curtin also served the Australian people in period of 5 but Curtin died in office and Chifley lost office in 1949 handing over the reins to Menzies.
2013 contenders
So who are the contenders for the leadership in 2013 and do they have these stars?
Possible contenders 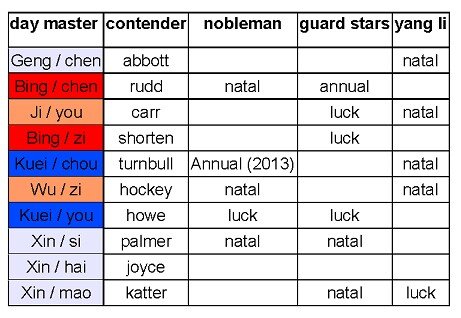 I have eliminated Julie Bishop as a possible contender for the leadership of the Liberal party and therefore as potential leader of the Nation. She has none of these auspicious stars.
The contenders with the best-placed stars which match the trend in previous Prime Ministers are Rudd; Carr (who enters a new luck cycle in 2013); Turnbull (who also enters a new luck cycle this year); and Hockey. It is important to note that Abbott has a very strong metal chart with the snake (annual branch) (and luck pillar) favourable in his chart. I think his chances will be affected by the month in which the election will be held. He will like earth and metal months but definitely NOT water.  Hockey looks like the strongest contender and then Turnbull from the blue side. On the pink (red side) is Rudd and Carr. If any of the others take out the election, they will not stay in power for very long if they follow the historical trend. Having said that, we cannot ignore the fact that Margaret Thatcher gained leadership of the British nation and the conservative party because no-one saw her as a real contender – she was seriously overlooked as a potential leader, was the compromise candidate, and then held the reins of that nation for a long period of time. I have not looked at the leaders of other nations to see if they share these stars. (Next winter’s project).
There is another player – that is the Australian nation.
The Australian nation
The modern Australian nation was formed on the 1st of January 1901 at 13.35 hrs.  All elements, except for fire, are present in that chart. To complete the 5 elements cycle you need fire – Rudd is a yang fire man and his wealth (career) is metal and it is present in his chart.
Abbott is a metal man whose career is wood which he can control easily. His metal is very strong, but he cannot handle the water in the nation’s branches. There is enough earth and metal in the nation’s chart to suit him personally but it seems that the flow should be the other way around.
There are two other significant dates for the nation – the date on which the parliament of Australia was shifted to the Old Parliament House site – 9th May 1927 at 11am.  Old Parliament House and New Parliament House have a lot more fire present, but the metal has disappeared. Did wisdom go with it? You can certainly see an interesting trend when you look at the past leaders of the nation, looking more deeply at their charts. Many of them had metal featuring prominently in their charts.  New Parliament House has a lot more water present and interestingly it is a metal shape, topped by earth, facing water (Lake Burleigh Griffin). Again, we will park this part of the analysis to be explored in a subsequent article about the whole site.
Founding of the Australian nation and Parliament Houses 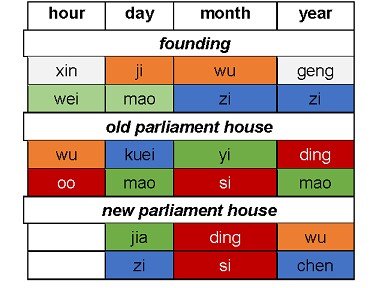 Vicki Sauvage graduated from the University of Tasmania with a Bachelor of Fine Arts. She finishing a 5 year collaboration with Richard Skinner (in 2001). Since then she has directed her creative skills to helping people design or redesign their homes and business places. She graduated in 1997 as a Level 2 Feng Shui Practitioner from the National Academy of Feng Shui Australia, (NAFSA). Since then she has built a successful Australia wide practice. She also works overseas including France and Malta. Vicki has been constantly in pursuit of upgrades to her Feng Shui training, undertaking advanced courses most years since graduating. She has studied with many internationally renown masters including Grand Master Raymond Lo, Master Joseph Yu, Master Peter Leung, Master Henry Liu, Grand Master Yap Cheng Hai and Mr Jerry King. She has traveled to China several times. The most recent visit was September 2009.