The City of London (The City) is London’s financial district.  It has a history that dates back some 20 centuries and it is now one of three premier financial centres in the world.  The City has always been involved in trading.  From the Roman times it was a trading hub of the British Empire and nowadays it is an important world financial centre.  So which came first?  Is it an auspicious location where people come and succeed, or did people come first and thus made it successful?

It has been recorded that Julius Caesar in 55 BC had been surveying the land, which later became a trading and defense post of the Roman Empire.  It was known as Londonium, the Roman name for London.  The Romans chose the 3 hills, now known as Ludgate Hill, Cornhill and Tower Hill for their settlement as it was above the level of the floods when they occurred.
London declined with the Roman Empire but in the 9th Century it became a trading post with links to Europe.  Its wealth and prosperity began to attract invaders with power passing from Viking to the English and then to the Normans in AD 1066. London has grown from these humble roots to become a cosmopolitan metropolis and literally a centre of the trading world in the 18th to 20th Centuries.
T 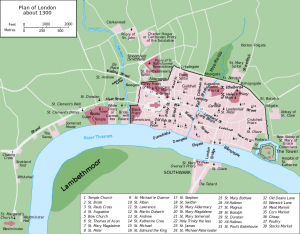 he City is the area North of London Bridge and its present boundaries are indeed roughly similar to those of the 13th Century map and occupies around a square mile in area.  Currently the City is a financial district and has its own local government and its own Mayor of the City of London. This is distinctly different from the Mayor of London.
The City vies with New York City as the financial capital of the world, with many banking and insurance institutions locating their headquarters here. The London Stock Exchange (shares and bonds), Lloyd’s of London (Insurance) and the Bank of England are all based in the City, together with over 500 other banks.  London is the world’s greatest foreign exchange market with about 40% of the daily global turnover of about $4.0 trillion in 2009.
Looking at the map of the City you can see that it is a random collection of roads and buildings. There had actually been a great opportunity to re-develop the City after the Great Fire in 1666, but unfortunately the traders in the City prevailed and the buildings were simply re-built on the land they already owned. The current roads of the City are also exactly how they were centuries ago and as such they run at all different angles with the buildings having all different shapes.
There are certain unique features of the City which include:
Structure of the City
Like all established cities of the world, it is located beside water, as this was a necessity for communications and survival (food and waste). London has the River Thames whose source is in the Cotswolds, which is to the North West of London.  The Thames River then flows into the London area from the West and passed the City.  As the river turns the corner, it also sends energy to various parts of The City and this energy brings the following characteristics:

‘Job Description’ of the various sections of the City of London (and slightly beyond)
A: This is the area where the Courts of Law are located. These include the most important Courts in the UK which are the Old Bailey (Central Criminal Court), the High Court of Justice and the Supreme Court. From the type of energy coming from the river, these courts not only have a high reputation of importance in the UK, but also to the rest of the world and are used by parties from many different countries to settle disputes. Certainly this would be an area where plenty of lawyers would be setting up their offices and the lawyers who work here certainly have the potential to be very wealthy indeed.
B. Fleet Street:  This was the area where the UK national papers were published and distributed nationwide. However in the 1980’s, with the introduction of modern technology, the publishers relocated away from central London where they could get more space. For example News International moved to Wapping and the Telegraph moved to Canary Wharf. The offices in Fleet Street are now occupied mainly by law firms, as the Courts of Law are situated nearby.
C. St Paul’s Cathedral:  This is the landmark building of London and the view of the Cathedral is actually protected. Hence the buildings in the west side of the City have restrictions in their shape and height. The towers and skyscrapers that are further along in the East side of the City have far less restrictions.
D. Paternoster Square:  Located just north of St Paul’s Cathedral , this is another area where publishers once congregated.  However with the re-development, it is now mainly occupied by businesses in the financial services such as banks.
E. Bank of England building and Royal Exchange:  This is the area where the banks are located and at one time there was actually a requirement that the banks should be located within a radius of a 10 minute walk from the Bank of England. However this rule was relaxed in the 1980’s. This area has a junction of 6 roads and a large open space (forecourt) in front of the Royal Exchange building. This place receives energy from 6 different directions and is therefore filled with energy, thereby making it an extremely auspicious location.
F. Lloyds of London:  This building houses the London Insurance Market and is located in the East side of the City. Around this building are other insurance companies including Swiss Re, which developed the Gherkin; also known as the 24 St Mary Axe.
The East side of the City does not have the same ‘demand’ as the west side.  Also there are less building restrictions at this end (such as hindering the line of sight of St Paul’s Cathedral).  This is where all the towers and skyscrapers are built, including Heron Tower and a cluster of towers which are under construction like Pinnacle, 100 Bishopsgate, 20 Fenchurch Street, Heron Plaza and The Heron.
Architectural Style:
It is all about getting floor area into the square mile and there is always demand for space. Property developers are constantly thinking of ways of getting additional floor area into the footprint of the land. Towers or skyscrapers are being built in the East side of the City and an example of this is 20 Fenchurch Street. With its bulbous top this type of building has striking views and achieves the best rents. As a result, the city is a mix of the old with the new and in my opinion, anything seems to go as long there is funding for the project.
Feng Shui Analysis:
London has established excellent connections to all parts of the world over the centuries and is located in a time zone which allows communication to both Asia and the Americas. The City receives energy from the land, but mostly from the river as it is located after the bend in the river. The energy from the river (instead of flowing with the water around the bend) goes straight ahead towards the City (as in the red arrows).
The road layout in the City is haphazard however and as a result this energy is not distributed evenly as in districts like Canary Wharf. Therefore some buildings receive more energy and some receive less.  Also there are buildings which have plenty of energy around them, but the doors are in the wrong place to receive the energy for the building.  It is somewhat random, but there are still a good number of buildings which receive plenty of energy as shown by the trading record of the district.
This goes back to the Question at the beginning of this post? Which came first?  Is it an auspicious location where people come and succeed, or did people come first and they made it successful?
London has been a trading post since the turn of the millennium – some 20 centuries. It is now one of the top trading centres of the world and this time span is greater than any human being.  From the historical record of London, it appears as though more people have come to here to work and achieve success than anywhere else over this period of time. Thus we can surmise then that it is indeed the environment or the location of London which helps more people to succeed here than in other towns or cities. Feng Shui is a Chinese system of Land Management and it is about how the environment interacts with the welfare of man.
Edition 5
0 comment
0
FacebookTwitterPinterestEmail

Jerry King with his Advanced IV of Destiny students in Russia